Literature, Culture, and Tradition: an online degree concentration for students of humanity 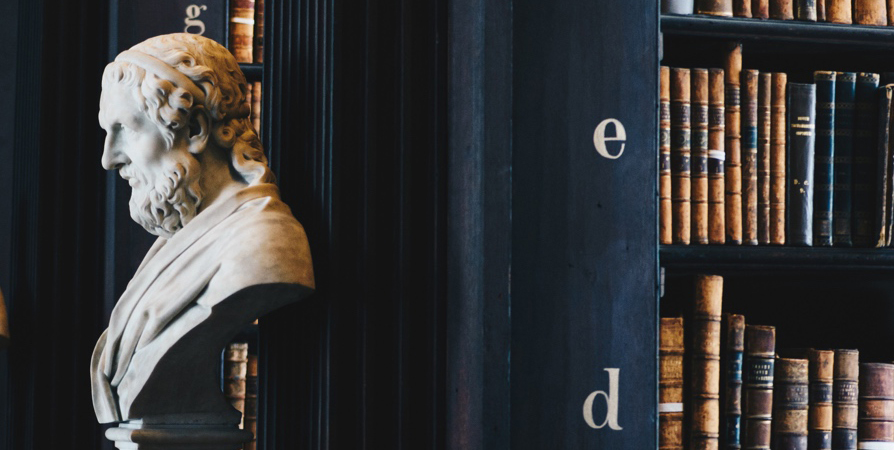 The Bachelor of Applied Arts and Sciences (BAAS) is not a traditional degree. “In the BAAS, students complete multidisciplinary concentrations instead of majors,” says Kris Rabberman, Assistant Vice Dean and Director of Academic Affairs for Professional and Liberal Education in Penn’s College of Liberal and Professional Studies. “What sets this online degree apart is that it blends the skills and knowledge from an arts and sciences foundation with the specific skills and knowledge that employers look for.”

While some of the program’s degree concentrations explicitly center professional skills, the Literature, Culture, and Tradition degree concentration spans subject areas such as global studies, creative writing, and classics. “The Literature, Culture, and Tradition degree concentration is a humanities cluster with connections to the social sciences,” explains Peter Struck, who is a Professor and Chair of Classical Studies at the University of Pennsylvania as well as Chair of the School of Arts and Sciences Continuing Education Faculty Committee which oversees the BAAS degree. In developing this option, he says, “We are aiming to think through the broader cross-disciplinary categories in which students are going to be pursuing their interests in the future.”

What is the Literature, Culture, and Tradition degree concentration?

“The humanities” is a term that refers to a set of academic disciplines focused on aspects of human culture such as art, literature, history, and even subjects that are also considered social sciences, such as anthropology and cultural studies. At Penn LPS Online, a humanities curriculum may include courses in classics, creative writing, English literature, religion and culture, and global studies—itself a diverse field of subjects including world music, Japanese film, and modern Middle East studies.

To complete a Literature, Culture, and Tradition degree concentration, students take at least four courses from at least two of those subject areas—so this flexible concentration can accommodate students with international ambitions as well as those with more bibliophilic interests. Though the accelerated 8-week courses are best suited to drilling down on specific subject areas, taken together they prepare students to understand historical themes, consider diverse scholarly perspectives, and interpret challenging texts in a variety of media.

In an online bachelor’s degree where many courses are explicitly linked to quantitative skills or “soft skills” designed for today’s workplace, the Literature, Culture, and Tradition degree concentration may at first appear to be one of the program’s more traditional offerings. But the innovative, nontraditional approach built into Penn LPS Online programs is spelled out in the name.

“The concentration's name is meant to describe a broad approach to human life, which is lived inside of cultures and traditions,” says Struck. “We study human subjects. They are not objects and their most interesting secrets don't yield themselves to quantitative measures. I think that’s what’s distinctive about the humanities.” That’s one reason the degree concentration was titled Literature, Culture, and Tradition, he says: “History would have been a perfectly good additional term to use, but I think history connotes more of a discipline. Traditions, of course, have to do with history, but tradition suggests a lived history.”

The Penn LPS Online approach to humanities, says Struck, is that they are “embedded” in human life—and in the student’s life as well. “The student is also a participant in being human,” he points out. Several of the courses within the degree concentration fulfill the qualitative analysis degree requirement, which means they explore methods of acquiring knowledge and understanding that can’t necessarily be observed numerically. “There’s never a sense that we’re going to analyze and measure the thing in front of us from some completely removed perspective,” says Struck. “Instead, you’re going to measure it subjectively, from within a participatory understanding of the world.”

How can an interdisciplinary humanities degree benefit you in the workplace?

Interdisciplinary education is a cornerstone of all Penn LPS Online programs. “Some students are excited to discover overlaps and resonances between what they have studied in one area and topics that they are now learning about from a different perspective,” observes Rabberman. “That is a really valuable moment in students’ educational lives, because it gets them to push beyond what may have looked obvious and think on a deeper level about those sorts of connections and see things that maybe other people aren’t seeing.” As an instructor of online courses in classical studies and religion—which are inherently interdisciplinary fields to a degree—Struck agrees. “I think that’s a necessary prerequisite for making your way in this world,” he says. “The future belongs to people that are agile in their thinking.”

To illustrate, look no further than your own experience: there’s a reason so many job interviewers ask about challenges you’ve turned into successes in the workplace. “When you're dealing with a problem in real life, it doesn't come to you under the rubric of a discipline. It's not like you get handed a dossier that says ‘Here's a math problem’ or ‘Here's a literature problem’ or ‘Here's a cultural problem.’ That doesn’t happen,” Struck laughs. “You get a problem that's just as complicated as life is, and you'll go at it with the set of tools that you have. A wider set of tools means a better solution.”

In that case, the purpose of an interdisciplinary education is to make sure you have a comprehensive set of effective tools. “You know the old saying ‘If you only have a hammer, everything looks like a nail.’ We want to make sure students are good at identifying what kind of problem they have in front of them and using an appropriate toolkit to solve it,” says Struck. “That includes quantitative thinking and qualitative thinking, your ability to discern what important contexts there are and which contexts are not important, and taking all the possible right answers and picking the best one,” he adds.

Particularly if you’re just getting started in your career or want to pivot to a new field, you may be tempted to ask what kind of jobs you can you get with a Literature, Culture, and Tradition degree. Struck observes that one of the principal benefits of an interdisciplinary humanities education is qualitative thinking, and suggests students think of how qualitative thinking can benefit them in their chosen profession. “Qualitative thinking requires some of the most subtle skills,” he says. “To be able to do it well, you’ve got to understand how arguments work and how they don’t work, understand the difference between judicious use of evidence and cherry-picking, and understand rhetoric, storytelling, and use of language.”

“We're not in the business of teaching only skills,” he concludes. “Skills are important, and you can learn skills in a thousand different ways now, including on the job, through Wikipedia, and watching YouTube videos. But Penn LPS Online is doing something different: we want students to increase their capacities to acquire skills, to improve their abilities to evaluate which skills are useful, to become better judges of who knows what they're talking about and who doesn't. Those are the results of the broad-based liberal arts and sciences education that we provide.”

How can studying culture improve your writing skills?

Another reason BAAS students might want to focus their studies with a Literature, Culture, and Tradition degree concentration is its focus on writing skills: it’s one of two degree concentrations that can be partially fulfilled with Penn LPS Online’s robust creative writing offerings.

Al Filreis, one of the faculty directors of the Penn LPS Online Certificate in Creative Writing as well as Director of the Center for Programs in Contemporary Writing at Penn, has observed many students come to creative writing relatively late in their academic careers, and regretting they didn’t embrace it sooner  “It’s funny how many students, when they finally get a spot in their curriculum, will take creative writing and say ‘I have always wanted to do this,’” he reflects. “It speaks to the attraction of invention and imagination. People love to tell stories, and creative writing is a place where students can express themselves in ways they can’t in other parts of the curriculum.”

Of course, not all students studying literature and culture think of themselves as writers—yet. Even so, says Filreis, the questions that drive literary study are critical to the project of studying humanity. “What do you do with the difficult text? Why is it so important to study interpretation, even if your interest is in a STEM field?” he asks. “The answer is that being faced with a difficult text is so far afield from areas in the curriculum where the point is to study until you get it, and then move on.” In contrast, he says, literary study poses questions that cannot be easily answered—and that, too, speaks to the complexity and innovation of human imagination. “A really hard poem by Emily Dickinson must be read and read again and again and again and again, and what you get from it is going to be different from what someone else gets,” he says. “The fact is that, after 150 years, no one really can get what Dickinson is doing in her best poems. And rather than that being sad, it's a triumph.”

In courses from other areas of study within Literature, Culture, and Tradition, students will still practice writing in different formats to think through difficult ideas, make persuasive arguments, and challenge the limits of their creative problem-solving abilities. They can expect challenging class discussions and both analytical and reflective writing assignments—particularly the latter, as a way to deepen their understanding of their own subjective point of view within a specific cultural context.

Humanities in the digital world and beyond

The online classroom seems like a natural home for the humanities, according to our program leaders. Filreis, who taught his first online poetry class in 1998, observes that digital technologies have made interpretation and writing skills all the more valuable in the modern world.

“There’s a cliche out there that writing is less important now because of texting and online this and that. Actually, being able to write well is more important than ever,” says Filreis. While he notes that this might change when our communication technologies do, “the technological tools that we're given feature writing prominently. When we say, ‘I was talking to X, Y, or Z,’ we might mean we were texting with them. Talking includes writing now.”

Likewise, Struck has been working with College of Liberal and Professional Studies on its early online programs since the turn of the 21st century; for him, one of the principal benefits of online courses is increased access to working adults and lifelong learners. “Penn LPS Online is introducing me to new Penn undergrads who might be in the middle of life, who might be at the tail end of one career and about to start another, who might have a driving ambition they haven’t been able to fulfill without a degree. It’s thrilling to reach out to them and see this education have its impact.”

“I think some of our prospective students may have been undervalued by other educational institutions,” he adds. “If people are telling them ‘All you need are job skills,’ I think they're selling them short. We're trying to provide a whole education that, when it’s done well, will honestly change your life.”